An Ace is generally associated with perfection, as the best in his field.

His artwork may be loosely related to the Red Mage class from the Final Fantasy video game series.

The Ace is perfect against units of the same color, giving him a +3 power when facing his own color.

This unit works in any capacity, though he's especially useful if he's the same color as a Village you'd like to attack. Without his color bonus, the Ace has a mere 2 Power, so think carefully before sending him to battle. 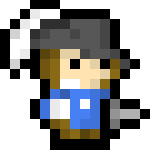 The alternate art is based on a Musketeer, as some translations of the game used this instead of Ace (as those languages typically associate the name Ace with a fighter pilot).

The alternate art is found on the Green and Blue Ace cards.

Retrieved from "https://villages-a-construct-and-conquer-card-game.fandom.com/wiki/Ace?oldid=5931"
Community content is available under CC-BY-SA unless otherwise noted.