A joker was a historical entertainer either employed to entertain a ruler or other nobility in medieval or Tudor times or was an itinerant performer who entertained common folk at fairs and markets. Jesters in medieval times are often thought to have worn brightly colored clothes and eccentric hats in a motley pattern and their modern counterparts usually mimic this costume. In medieval times jesters entertained with a wide variety of skills which could include songs, music, storytelling, acrobatics, juggling and magic. Much of the entertainment was performed in a comic style and many jesters made contemporary jokes in word or song about people or events well known to their audiences. Some of them became extremely rich because noble paid them well to avoid being mock by the jester.

In the game, Joker changes the combat by giving the defense the upper-hand in case of a tie.

The Joker can be used to win fights against much more powerful cards. In particular, the Joker is useful against cards such as the Dragon or Kaiju. But he will lose to otherwise weak cards like the Scout, so it's best if he's hired when attacking. 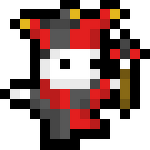 The alternate artwork has the coloring of Harley Quinn from the Batman comics, etc. However, as the Joker has not officially swapped genders and has short hair, it's also possible that the coloration is coincidental.

The alternate art is found on the Purple Joker card.

Community content is available under CC-BY-SA unless otherwise noted.
Advertisement