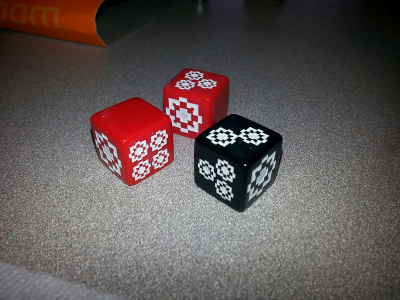 The Power Dice are an optional addition to Villages that add extra tension to battling. There are two kinds of dice: Safe and Risky. A Safe die is black and has a good chance of getting a bonus +2 power; a Risky die is red and has higher numbers on it, but also a higher chance of rolling a 0. They are available as sets of two Safe, two Risky, or one of each.

They first appeared at CONduit in 2013 as a pair of red dice (with Safe numbers) available only to attendees, though very few were ever sold. The dice were added to the Kickstarter campaign, where over half of backers added them to their pledges, resulting in a second color (black) being made available through stretch goals.

A poll was created to determine if backers wanted the new black dice to have different values from the original red dice. This idea had overwhelming support. However, there was a surprising number of people who wanted the red dice to have the new value and the black to have the original, resulting in the current Safe and Risky dice.

These custom dice are cut and filled by Daft Concepts.

When using Power Dice, dice are chosen after both units in battle have been revealed. When one of each type of dice are used, the defending player chooses their die first, and the attacking player must choose the remaining die.

A riskier and more manly way of playing with the dice is to get one risky and one safe and roll them together. The risky (red) die adds additional power, whereas the safe (black) die subtracts power. Both players roll both dice, and add and subtract the results. This gives a new luck component to the game that is refreshing.

If you have one of each type of die, the defender gets to choose their die first, leaving the attacker with the one left over. If the defender is already losing by a large margin, they should choose the Risky die for the possibility of a +4 (like when facing a Dragon with a Warrior). However, if you already have the advantage, it is safer to go with the Safe die (obviously).

The only card in the game to refer specifically to the Power Dice is the Gambler.

Retrieved from "https://villages-a-construct-and-conquer-card-game.fandom.com/wiki/Power_Dice?oldid=7140"
Community content is available under CC-BY-SA unless otherwise noted.